St. Tysul and his Church 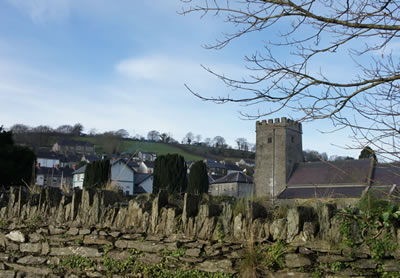 The fine old church is the oldest building in Llandysul dating from the 13th century, but standing on an ancient foundation named after St. Tysul who founded it in the 6th century. St. Tysul was the son of Corun, the son of Ceredig, who gave his name to the kingdom, now the county, of Ceredigion. Ceredig had another son, Sant, who was the father of our Patron Saint, St. David. Thus Tysul and St. David were first cousins.
In the Choir Vestry are a collection of early Christian inscribed stones, amongst which is the Velvor Stone commemorating Velvoria, daughter of Brohomaglus. This stone has a bilingual inscription, in Latin and Ogham - the ancient Irish language, and this gives evidence of the Irish population settled here at the time.

Fairs and markets were established by the Kings of England and the Edwardian marcher lords, who captured these lands from the native rulers from the 12th to 14th centuries.

Owain Glyndŵr was chosen Prince of Wales in 1400 because his father, Gruffydd Fychan was Prince of Powys, and his mother, Elen, was Princess of Deheubarth (South Wales).  Elen, her sister and two brothers, were directly descended from Rhys ap Tewdwr, the last King of all South Wales.  The men of Llandysul were the first to join Owain in war in 1400, and thus Owain Glyndŵr's lands around Llandysul were confiscated by Henry IV.  Elen's husband, Gruffydd Fychan, had been Lord of Llandysul when Elen's brother, Owain ap Thomas ap Llywelyn, and uncle, Owain ap Llywelyn, died. These men had been joint Patrons of the church of Llandysul and held courts in the town. There is therefore good reason to think that amongst the older buildings of Llandysul is the Court of Owain Glyndŵr and his ancestors. You can read more on the Llandysul & District Local History Society website. 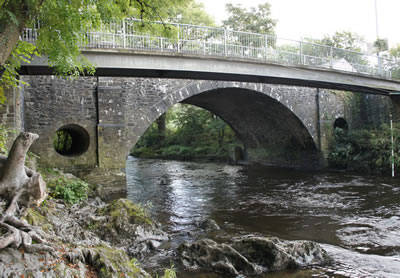 Bridge knocked down by Royalists

Calan Hen, the “Old New Year” and the “Pwnc”

From earliest times, New Year's Day was celebrated by a game of Cnapan (football) played between the porches of Llanwenog and Llandysul churches as goals. The game was a survivor of an old war, and by the beginning of the 19th century many people had been killed or injured during  the game. When the new Gregorian Calendar changed the date of the New Year in 1752, the people of the area continued to hold the football game on the old New Year - 12th January. The toll of death and injury was not considered to matter too much, but by 1833 the Vicar of Llandysul decided that it was not longer suitable for the game to be played between the two churches. He established a scripture competition between the local parishes, which continues to this day, on the closest Saturday to 12th January.  See the St Tysul's Church website for details.

This radical thinker and Unitarian leader, came from near Brechfa, and was the ancestor of the writer, Dylan Thomas. Gwilym Marles was also a lyrical poet (published 1859) and wrote widely on other subjects. After graduating from Glasgow University, he became a minister at Llywnrhydowen. He is better known in Llandysul for championing the non-conformist tenant farmers in their “Tithe War” at Rhyd Owen. He founded a grammar school in Llandysul, in the house on Seion Hill, which bears a plaque in commemoration.  Gwilym Marles took a leading part in the Parliamentary elections for the Liberals against the landlord Tories and he and his congregation were thus thrown out of the chapel in 1876. He eventually triumphed and is buried there.

One of Llandysul's treasures is Gomerian Press, founded by John David Lewis (1859-1914). He began working in his father's grocery shop, but soon became interested in literature, by selling books in a corner of the shop. By 1892, he had established the press. By 1908 it became known as the Gomerian Press and is now the biggest Welsh-language press in the country. Gomer also has a fine reputation as a publisher of English-language books. The press moved to new premises on the outskirts of the town in 2004.

The Teifi Valley around Llandysul is the home of the Welsh woollen industry. The proximity of large tracts of upland grassland for sheep and the large number of dependable rapid-flowing steams, which could be utilised for driving water mills, made this the natural place for the development of woollen manufacturing. A number of mills survive in the area, but those in the town have been converted into other uses. There were also flannel shirt factories which formerly provided work in the town. You can visit Rock Mill, a working woollen mill at nearby Capel Dewi or visit the National Wool Museum at Dre-fach Felindre.